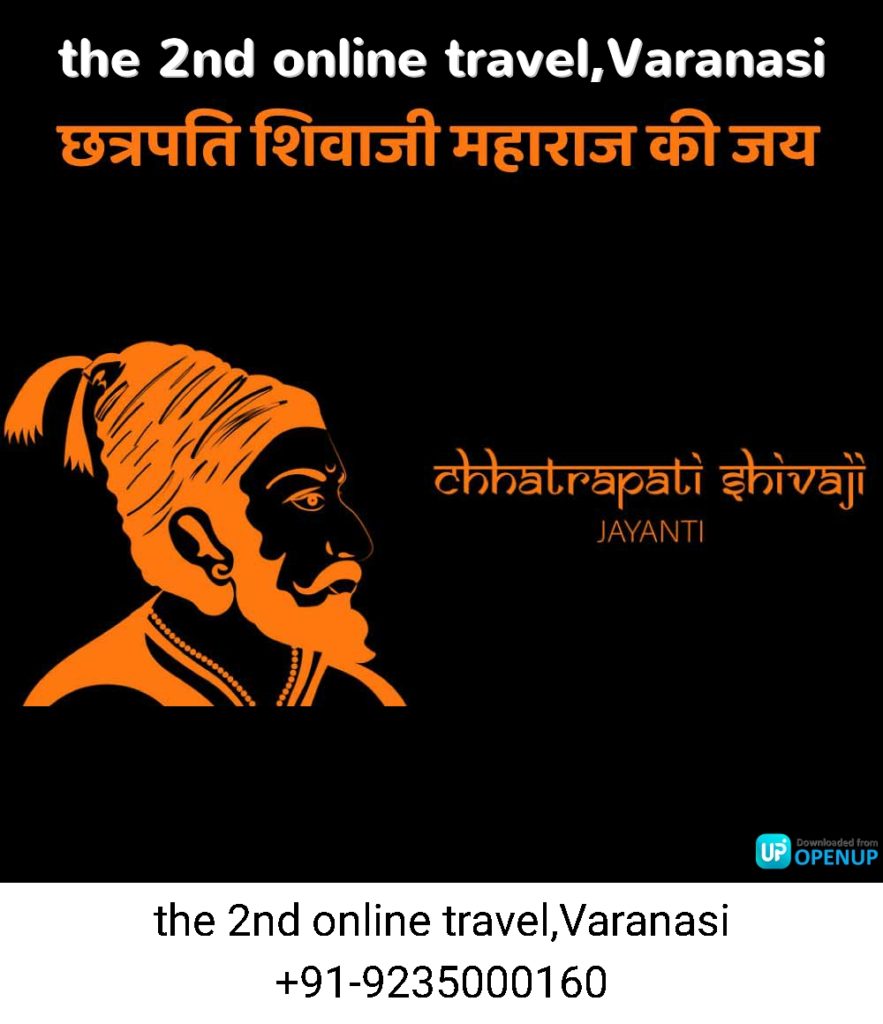 He was mainly influenced by Mahabharata, Ramayana and other holy books which his mother explained him. Shivaji gained a lot of knowledge from his father’s unsuccessful attempts to gain power and was inspired by his father’s military tactics and peacetime diplomacy. He had great knowledge on Sanskrit and Hindu scriptures. Shivaji got training from Gomaji Naik and Baji Pasalkar and became a fearless leader. In his early days Shivaji was successful in inspiring local youths to follow his idealistic pursuits. Shivaji attacked and captured Torna Fort of Bijapur at the age of 17. By 1654, he took control of Kondana, Raigad Forts and the Western Ghats along the Konkan Coast. In order to destroy Shivaji’s rise to power, Adilshah arrested his father by fraudulent means and had armies sent against Shivaji and his brother Sambaji. Afzal Khan who was sent to destroy Shivaji was stabbed by him. In battle of Pratapgarh between Shivaji and Bijapur’s armies, Shivaji became hero. Under Shivaji’s leadership, Mughals were pushed back. Shivaji was crowned as a Chhatrapati in 1674 at Raigad fort. He died in 1680.

Shivaji Jayanti is celebrated every year on his birthday on 19th February. On the occasion of Shivaji Jayanti several parades are conducted and people dress up like Shivaji and his followers. The birthday is celebrated grandly and various programmes demonstrating his achievements are organized.

“The person who chooses Swarajya over Family is a true citizen.”

Shivaji Jayanti is not just a festival but it taking inspiration from Shivaji to be like him in some way…. Best wishes on Shivaji Jayanti. 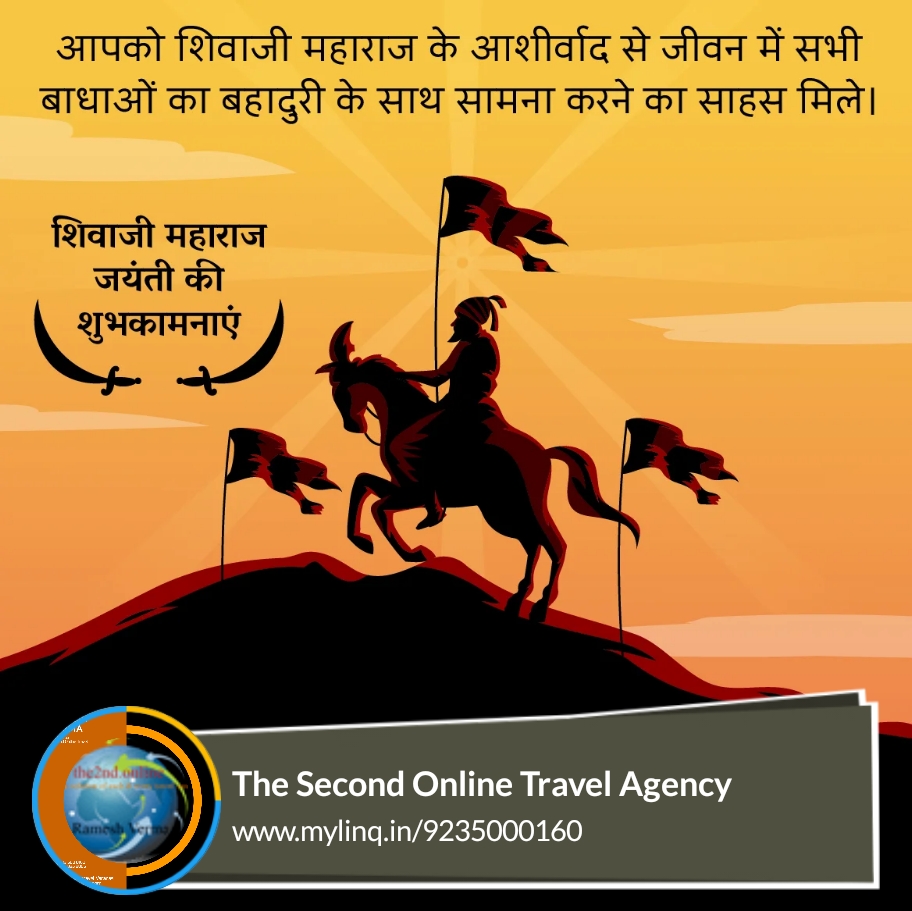 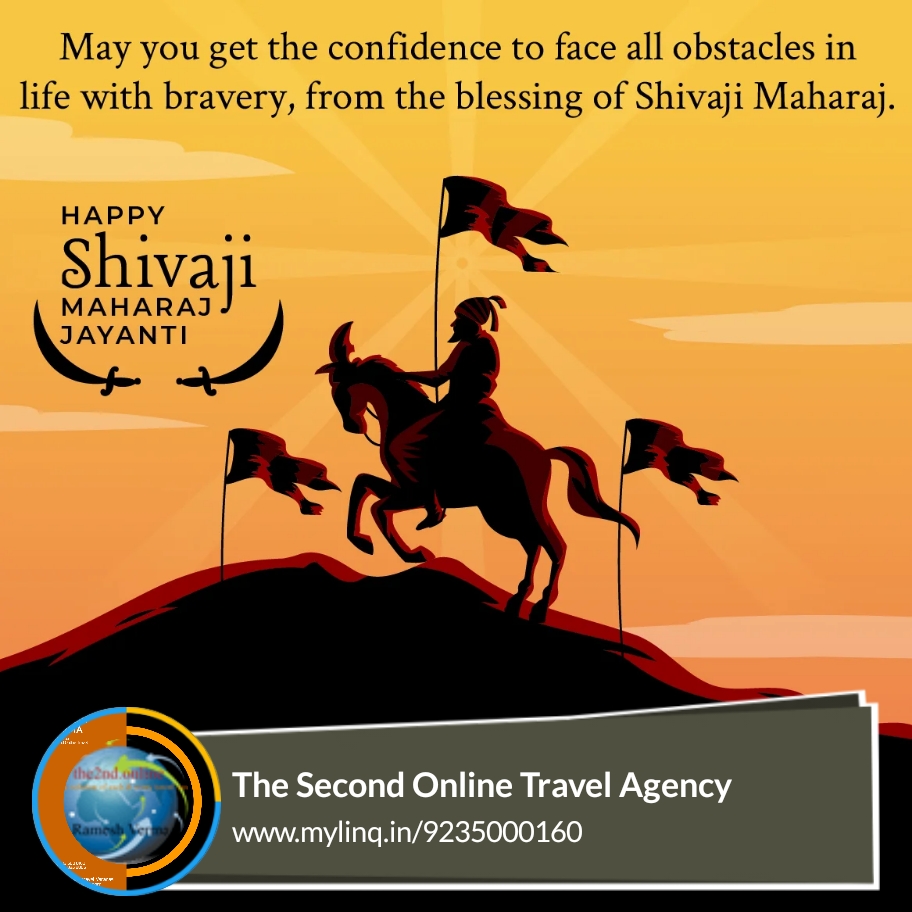 The 2nd Online Travel Agency is a flourishing name in the tourism sector of Uttar Pradesh. Second Online, the word, Second Online, has been derived from the Cosmic energy/spiritual energy, which is always online and has got unseen network connectivity. It is infinite. It never goes offline. This travel management firm was founded in the city of Varanasi by Ms Nimita Kumari ( Sole Proprietor), Mr Ramesh Verma (CMD) & Ms Noyasally Verma ( the one and only successor ) on 13th April 2018. After working for more than 02 decades in the Hotel Industry in many different positions, they switched their career to the Travel & Tourism Industry by establishing their own company named The Second Online Travel. Their aim for establishing the company was to provide a rich holiday experience to travellers across the globe at best & economical charges. Under their leadership, the 2nd Online Travel Agency has successfully carved a niche for itself in the Travel & Tourism industry. The 2nd Online Travel Agency in Aktha, Varanasi, is a top player in Domestic/International Travel Agents in Varanasi. This well-known establishment acts as a single-stop destination servicing customers both local and from other different parts of the world. Throughout its journey, this business has established a firm foothold in its industry. The belief that customer satisfaction is as important as their products and services have helped this establishment garner a vast base of customers, which continues to grow by the day. This business employs individuals dedicated to their respective roles and puts in a lot of effort to achieve its shared vision and heftier goals. This business aims to expand its products and services and cater to a more extensive client base soon. In Varanasi, this establishment occupies a prominent location in Aktha ( Pahariya). It is an effortless task in commuting to this establishment as there are various modes of transport readily available. It is at Colony Aktha Pahariya Varanasi, Usha Guest House near Sati Mata Mandir, making it easy for first-time visitors to locate this establishment. It is known to provide top service in the following categories: Domestic / International Travel Agents, Car/Tempo Traveler/ Bus on Hire, Travel Agents, Railway Ticketing Agents, Bike On Rent, Domestic/International Air Ticketing Agents, Bus Ticketing Agent, Foreign Exchange Agents, Money Transfer Agencies and many more. The 2nd. Online Travel Agency in Aktha has a wide range of products and services to cater to the varied requirements of their customers. The staff at this establishment are courteous and prompt at providing any assistance. They readily answer any queries or questions that you may have. Pay for the product or service with ease by using any of the available modes of payment, such as Cash, Master Card, Visa Card, Debit Cards, Cheques, Credit Card, UPI and many other prominent online payment gateways. This establishment is functional from 00:00 - 23:59. It is a women-led company having the GST certification under the name of Ms Nimita Kumari, The 2nd Online Travel GSTIN number - 10CKVPK4911P1ZP A team of professional employees adds the 2nd Online Travel Agency. All are bifurcated into different sections for serving clients that approach us regarding various services. Since our workforce is agile and prompt, they resolve the query of a client in no time. Owing to their dedication, we have been successful in establishing a sizable clientele in and around Varanasi. Our prime target remains the satisfaction of the client. Our employees leave no stone unturned in making the tour experience of clients full of comfort. Feel free to connect with us to know more or avail of our services. For more details on our product and services, you can either give a missed call at 0 9235000160 or write an email to the2ndonline@gmail.com. You can also contact us through our official webpage - https://the2ndonline.com Blog-- www.thesecondonline.com @travel2421 #travel2421